History has often wiped away the impacts of women from their pages. However, many are trying to write about that wrong by rewriting history to include them. We can see this in books such as Good Night Stories for Rebel Girls that tells the stories of women lost in history

. One female artist that is now getting recognition is Berthe Morisot

, one of the most innovative artists. The Dallas Museum of Art is doing a special exhibition dedicated to her career as an artist. She lived in France during a time were women’s job was only to be caretakers, and truly rebelled against the notion that she was only a mother and wife. 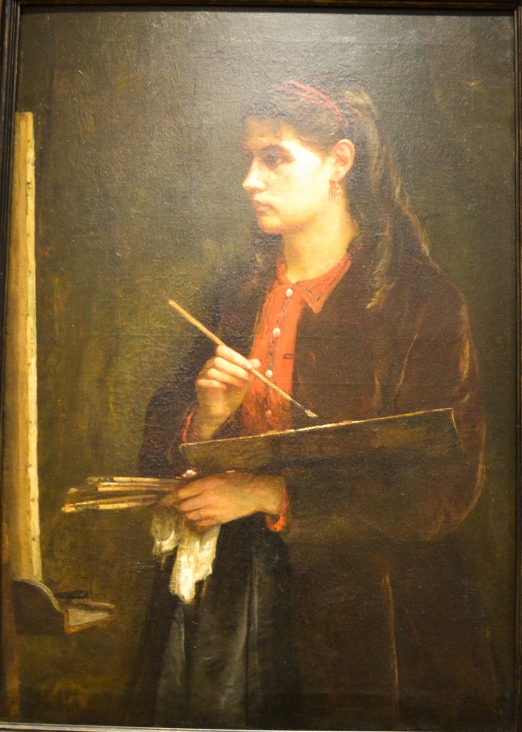 Berthe Morisot’s family let her and her sister pursue their interest in art and didn’t stop them from being mentored by some of the greatest artists of her time. Despite her sister giving up her passion, Berthe became a founding member of the Impressionist movement. However, she didn’t receive honors during her lifetime like her colleagues such as Claude Monet, and Edgar Degas. She helped developed modern art in France through her art and efforts within the French government. How did she do this?

She implemented in Parisian avant-garde culture by focusing on figure paintings. These paintings mostly focused on Parisienne or Parisian women which depicted modern women during her time. These women were fashionable, and sophisticated. She depicted them doing leisurely activities (sewing, playing, music), domestic care (cleaning the house, raising children), and in various states of dressing. However, it was the ways she broke the model of the Impressionist movement with these women that made her stand out in terms of art history.

The women in her art are often showing expressions of melancholy even when interacting with their children. This was very different from the usual expressions that men painted women. Men from the era tended to paint women as if they were in bliss when  surrounded by children and menial tasks. Berthe unusually sketch of woman displaying dissatisfaction for the role they were suppose to play according to society standards. I have a feeling why she displayed this expression on the women, because it was possibly her own feeling towards the traditional role of women. Her sister gave up her dreams of being an artist when she got married so that she could run a household. Berthe however never gave up her aspirations when she got married. Berthe never wrote her profession on her marriage or death certificate since she wasn’t acknowledge by the art community. She even signed her artwork with her maiden name. However, her husband supported her efforts to become a recognized artist and helped her pursue her interest. She knew that she was fortunate to have the support from friends and family that many didn’t receive so she told the story of her sister and many like her that were forced to take a maternal role and leave their aspirations behind.

Another way she pushes the boundaries of art was pushing what could be unfinished and finished work along with blending interior and exterior backgrounds. She sometimes blurred the figure’s faces. I personally love some of her work that seems entirely unfinished except the face of the figure which is in full detail. You can see the variety of her progressive artwork in Berthe Morisot

by Rizzoli Electa. However, Berthe was doing more than trying to open the public’s eye to the feelings of women but promote other artist in her community by helping petition the French government to purchase her colleagues’ work.

truly impacted the art world and should be recognized for her work. However, she was able to receive this recognition due to her supportive friends and family. It makes you wonder how many untold stories are there in the world of women like Berthe Morisot

, who changed the world, but was potentially erased from history before they were recognized.

How many more stories like this are out there truly? Can we fix our history to include these pasts that were over looked?