Slipping into the lobby and slowly become immersed in the rich and glamorous atmosphere as the hostess notifies the restaurant that you have arrived. Be guided down a darkened hallway to only be surround by hundreds of celebrity photos and autographs along with the accolades that the restaurant has earned over the centuries. See the article featuring the awarding of their Michelin star by proudly displayed like a rare artifact. Slip into the elevator while you are still processing the marvelous history to be shocked awake when the doors slip back open to one of the most stunning sights in the world. There in front of the dining tables lays the Norte Dam and Seine. No obstructed view due to advertising or tourist. You almost feel like you are automatically transported 100 years ago, back to when all this majesty was created.

The staff take turns guiding you through the selections but there is only one thing on the menu that everyone should get if you eat meat, the duck. This the duck of legend. The duck that my parents ate over their honeymoon almost 20 years ago and still rave about. Course after delicious course of food that brings the anticipation to a peak until the most perfect piece of duck is before you with a sauce so rich and decadent that you know it was a labor of love, which it was by crushing the bones of the duck to extract the very essence of meaty duck. They take so much pride in their duck that they even give you cards with your ducks tag number on it so that you can trace the lineage and know you are getting quality because the restraint cares to highlight their product and its’ producer.

Now the other dishes were fantastic too. For example, the appetizer made of several varieties of cucumbers. Who knew that there was so many different types and that they would all taste so different? The chocolates at the end were fantastic as well. Now I understood why my parents dream of this restaurant. They weren’t alone in their awestruck for this restaurant. La Tour d’Argent became the inspiration of Gusto’s restaurant in Ratatouille  (Disney ‘s film). Even boat tours and walking tours of Paris mention the history  and glamour of this restaurant. This is the ultimate must do while one is in Paris, France.

Tonight I will dream of duck bathed in glorious cherry sauce and count my days until I return to La Tour d’Argent. 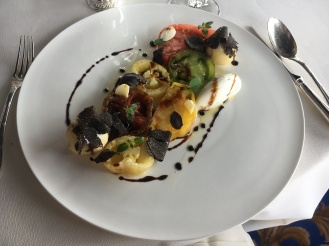 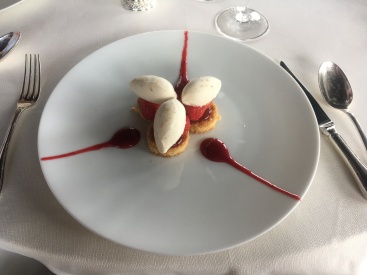 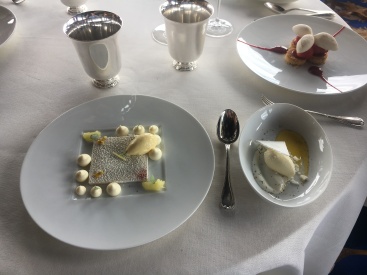